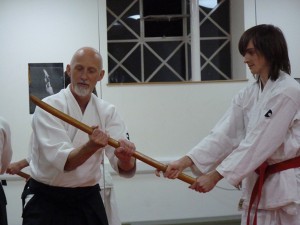 One of my not-so secret pleasures is haunting second hand bookshops.  I like finding old editions of books I read when I was young, so I can recapture my youth, and keeping a lookout for unusual martial arts books, particularly aikido.  As a result I have a small collection of quite early aikido manuals.

As I flick through the yellowing pages, enjoying the smell of old paper, hoping to find a variation on a familiar technique, I am often struck by one particular thing.  Some of the techniques demonstrated in the old photographs do not look particularly good.

I know this may be considered sacrilege in some quarters, but I don’t think that old is necessarily better.

As I write I am looking at a kotegaeshi demonstrated in a book published in 1966. Tori has just checked a punch with his left handblade.  The instruction goes on:

Tori now turns to face Uke.  He does so by taking sweeping step with his right foot in a half circle and following this with a smaller step back with his left foot.

In the photograph this leaves tori face to face with uke.  Now according to Stanley Pranin of the Aikido Journal this leads to:

At this point, nage becomes vulnerable to uke’s counterattack and is only spared an unpleasant outcome by the cooperative nature of his interaction with uke.

It’s important that I now make it clear that I am not being critical of the author of the book I am quoting from.  He held high dan grades in judo and aikido as well as kendo.  At different times he fought for both sides in in the Japan East-West Contests and had been team captain. He was invited by O’Sensei to study under him at his home in Wakayama prefecture and in Tokyo.  Kenji Tomiki writes a very complimentary preface to the book.

There is clearly no doubting the writer’s credentials or his martial knowledge.  And yet his representation of kotegaeshi is not one modern aikidoka would approve of, being in Stanley Pranin’s words “From a martial art standpoint, [this is] a major strategic blunder.”

You can see similar faults if you look at old photos of most techniques – shiho nage where uke’s balance has not been disrupted, nikkyo applied directly in front of uke leaving tori wide open to a punch to the face (or worse!) – the list goes on.

How it is possible that there are other things going on here.  With older books, it may be that the camera wasn’t good enough to capture the moving images clearly – and if there is one thing you can say about aikido, it moves – so instead, the photographs are posed.  Unfortunately a posed photograph is never going to accurately reflect uke’s broken posture at the moment just before s/he falls.  I have books translated from Japanese and to quote Dennis Clark, the translator of “Enlightenment through Aikido” by Kanshu Sunadmari:

… the differences between Japanese and English are significant, and nuances of meaning tend to get lost in the process of translation.

He goes on to say anyone seeking to truly understand the words of the Founder should ideally read them in the original Japanese, but even a perfect grasp of Japanese or a perfectly accurate translation would not necessarily ensure full understanding.

Let me repeat here and now that I am not criticising the authors of these works; I am more fascinated about the way our perceptions of how techniques should be done has changed.  After all, at the time the book was written it must have been believed that the technique was being performed correctly and effectively.

Now this leads me to question the way we practise aikido now.  There is plenty of discussion on how effective particular techniques would be “on the street.”  What I am speculating  is whether in 60 years’ time the techniques that we are now  sure are the best, the most realistic will be regarded with the same degree of contempt as we have for some earlier techniques.

After all, before Copernicus most people thought the sun went round the earth and for much of the Middle Ages the earth was believed to be flat.  If aikido teaches us anything, it shows us that nothing stays the same.  In his book “The Spiritual Foundations of Aikido” William Gleason says:

Aikido is the study of Nature’s laws … The basis of natural law, as of every individual’s existence, is the principle of change, or movement.

Indeed, aikido would look pretty ineffective if we didn’t move.  Fairly early on we learn that the energy from an attack can change and we have to change also to accommodate it, or we’ll end up with a punch in the face (or worse!).

And obviously this lesson transfers into life, where we have to learn that what upsets and frustrates us most is trying to cling to things – either real physical objects that we have, or emotions or relationships.  We convince ourselves that if we have this car, this watch, this house we will be happy so we cling to the need to have that thing, and if and when we get it we are happy for a while, but we soon go back to our original level of dissatisfaction.

In 1978 researchers interviewed Illinois State Lottery winners and compared them with non-winners.  They asked a series of questions designed to measure happiness levels.  It was found that the overall happiness levels of lottery winners spiked when they won, but soon returned to pre-winning levels.  In terms of overall happiness, the lottery winners were not significantly happier than the non-winners.  This seems to be that this is because we become attached to getting, having and holding instead of accepting change, both good and bad, and working with that.

In short, to quote one of my favourite authors, Pema Chodron, “There isn’t any hell or heaven except how we relate to our world.  Hell is just resistance to life.”

So let’s enjoy our aikido, teach and practice the best techniques we can, but always be prepared that tomorrow may bring a new or different variation on what we do that is better … at least for the next couple of months.