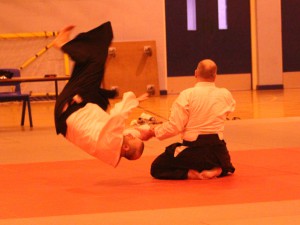 The Japanese martial art of Aikido is a comprehensive system of throwing, joint-locking, striking and pinning techniques, coupled with training in traditional Japanese weapons such as the sword, staff and knife. Founded by Morihei Ueshiba early in the twentieth century following his own extensive study of various armed and unarmed martial systems, Aikido represents a potent distillation of centuries of Japanese martial knowledge. It is one of the most widely practiced budo, or martial way, in the world.