Don’t Do As I Do by Mark Peckett 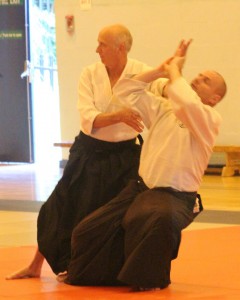 I have written before on the problem of not teaching “old man’s aikido”.  I’m 61 now and I physically can’t do the things that I could 30 years ago.  The knees don’t bend as well (or rather they bend, but they don’t straighten up as easily!) and I certainly don’t have the same physical power or speed I had even ten years ago.

I already have trouble reading small print and hearing conversations in crowded rooms, my gums are receding and my teeth falling out.  I’ve got more wrinkles, I’m thickening up round the waist and a touch of arthritis in my thumbs.  I may end up with high blood pressure or osteoporosis.

When I go to a seminar or course, I still forget my age, and throw myself into the Friday evening class, and the Saturday morning, but by the afternoon I’m definitely slowly down, and I spend Sunday standing in a corner with the other old men.  The spirit is still willing, but the flesh’s recovery time takes a lot longer these days.

I like to think that those things I’ve lost – flexibility, endurance and speed   – have been replaced with improved technical ability and greater sensitivity; I’m less obsessed with the technique that smashes my partner through the floor – the finish – and more with what’s going on with uke during the course of the technique.

However, when I see photographs and videos of myself, I can see the loss of the vertical in my body, the same thing that I pick my students up on, and it’s embarrassing.  The only thing I would say in fairness to myself is the period in my 20s when I developed my anti-establishment “hippie slouch” has been replaced by a more unconscious stoop that reflects my age and it’s something I am working on.

I find shikko hard these days because of arthritis in my toe caused by the time I broke it whilst practising and stupidly didn’t bother to do anything about.

So my kokyu, hanmi handachi waza and seated techniques have a flavour which is uniquely mine – again one which I try not to pass directly on to my students as it involves favouring my weaknesses.

When I watch my students, I see that each and every one of them has a unique flavour – their moves aren’t perfect.

Many years ago I practised with a man who had suffered a brain aneurism which resulted in a partial paralysis of his right side.  It meant that he could not step back when doing kotegaeshi.  He had adapted this “weakness” and drew uke round his body into the kotegaeshi – you literally ran onto the technique with all your impetus and body weight.  It was a technique I stole.

We’re none of us perfect – in fact, just the opposite.  We are imperfect creations, by and large doing our best – and this is what makes us perfect.

We should revel in our imperfections, build on our weaknesses.  They are what challenge us to change the at least cope with.  After all, we want to be human, not computer-generated perfections.

Amongst my students there are the young, middle-aged and old.  At least three of Shakespeare’s Seven Ages of Man.  I myself have played many parts, but now I am in the sixth age and shifting into:
… the lean and slippered pantaloon,
With spectacles on nose and pouch on side …

My shanks are shrunk and my big manly voice has turned again to a childish treble.  But before I end up sans teeth, sans eyes, sans taste, sans everything, there is still time for aikido.

Robert Frager, who I have mentioned before in these blogs, practised in Japan in the 60s and 70s, reports that O’Sensei said:

Whenever I talk about or practise aikido, arthritis and my age, none of that is relevant to me.

I find the same thing.  It doesn’t matter how bad a day I’m having, after my aikido classes I always feel fine.  Of course, that’s teaching – which means I get to talk about aikido and throw people about without getting thrown myself!  It’s a different story when I’m taking about a hundred throws myself and getting up a hundred times.

At first I hated standing in the “old man’s corner”, in much the same way I hate looking in the mirror when I shave, because it’s a reminder that I’m not only getting older, but every day closer to the grave.  If I want to be charitable to myself, I have maybe another 25 Christmases left and believe me that doesn’t seem like much.

But slowly I’ve got used to it and even appreciate it.  There’s a certain camaraderie in swapping aches and pains and illnesses.  “Hip replacement?  You were lucky!”  These are things we can’t defend ourselves against – fish oil might keep the joints lubricated, ginko biloba might help ward off Alzheimer’s, but there’s no getting away from the fact that we’re going to get old and die.  At least Aikido has kept me supple for my years.

We can’t tenkan against that inevitability, but we can use the emotional energy that arises from those feelings in a positive way.  Again this is what aikido teaches us.  We don’t have to meet those negative emotions head-on and let them overwhelm us.  The counsellor and psychologist Tom Crabtree who used to write for Cosmopolitan magazine once advised a woman who intensely disliked her mother to meet her once a month, for lunch, and be totally loving towards her during that time.

This is similar to the Native American ceremony of “killing the enemy” that Terry Dobson writes about, where the tribe get together in a sweat lodge and praise all of their enemy’s good qualities until the stop focusing on the bad ones.

In the same way, I’m going to focus on the pleasure of standing talking with people my age at the edge of the mat and enjoy watching the younger aikidoka crash each other into the mats.  I’m going to carry on doing my weird knee-walking and work on correcting my slouch.

And I’m going to tell my students not to copy all my bad habits!