What’s in Your Paintbox? by Mark Peckett 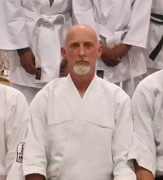 In her book “The Writer’s Life” Annie Dillard quotes the artist Paul Klee as saying:

You adapt yourself to the contents of your paintbox.

And, of course, like everything else I write about, I see that as a metaphor for aikido and life in general.

For example,although I still do shikko, hanmi handachi waza, kokyu ho and Suwari waza, because some years ago I broke the big toe on my left foot and now arthritis is setting in, I can’t perform them in what might be called the classical manner.  And I have to warn my students of that so that they don’t end up copying me (reproducing something I have written about before: “old man’s aikido”).  I wouldn’t want a young man in his twenties to do some weird hobbling thing simply because that’s the way his teacher in his sixties does it.

And I’ve already written in a previous piece about a man I practised with many years ago who had suffered a brain aneurism which had affected one side of his body, making it difficult for him to move his left foot.  This meant he could not step back when he performed kotegaeshi.

To overcome this problem, instead of drawing the technique past him by turning his hips, he turned into it and rooted himself.  This meant you came round his body very quickly and literally ran into the technique with the full momentum of your body.

The first time you experienced it, it was devastatingly painful and after that, aware of what was coming, you tried to control your speed and even fling yourself backwards to protect your wrist.

Needless to say, the technique is a colour I’ve added to my paintbox.

One of my early instructors once had a one-armed student.  He said he enjoyed the challenge of working out how aikido techniques could be applied one-handed.  I can’t say whether he added any of the techniques to his paintbox.

Of course, what Klee is actually talking about is not adding to the paintbox, but working with what we have.  He goes on to say that adapting one’s self to one’s paintbox is more important than the study of nature.  Although I would say that the contents of the paintbox actually is nature.  For a poor artist with a limited palette, it is the nature of economics.  For an isolated artist who has to make her own paints, it’s the nature of geography.

To start mixing metaphors, we all have to play the hand we are dealt.

So as the years go by, my palette becomes more limited physically.t has changed and the pictures I paint now aren’t the same as the ones I did in my twenties, thirties or forties.

Another of my favourite newspaper columnists is Clive James.  Many years ago he used to write an acerbic television review (which is why to this day I think of the TV series “Poldark” as “Old Krap”), and in 2011 he was diagnosed with lymphocytic leukaemia.  The column he now writes for The Guardian comes from a palette coloured by the fact he did not expect to see the end of 2015.

In fact, he wrote a poem about it, published in the New Yorker back in September 2014, which I am going to reproduce here in full:

Your death, near now, is of an easy sort.

So slow a fading out brings no real pain.

You feel the drain

Of energy, but thought and sight remain:

When did you ever see

So much sweet beauty as when fine rain falls

On that small tree

And saturates your brick back garden walls,

So many Amber Rooms and mirror halls?

Ever more lavish as the dusk descends

This glistening illuminates the air.

Whenever the rain comes it will be there,

Beyond my time, but now I take my share.

My daughter’s choice, the maple tree is new.

Come autumn and its leaves will turn to flame.

What I must do

Is live to see that.

That will end the game

For me, though life continues all the same:

Filling the double doors to bathe my eyes,

A final flood of colours will live on

As my mind dies,

Burned by my vision of a world that shone

So brightly at the last, and then was gone.

Although I enjoyed the wit of his television reviews, I find the columns that he writes now, living on borrowed time thanks to a new chemo drug, of greater depth and wisdom, speaking directly from the heart, although still filtered through a sharp intellect.

He writes poignantly of the song “Hurt” sung by Johnny Cash towards the end of his life, and how the song seems to say his life has come to nothing.  “But,” says James, “we know that he can’t be right, or he wouldn’t sound like that. It’s an untrained voice, but regret has brought depth to it.”

Cash’s palette had changed and he was using it to produce what in the end may be his most memorable work, San Quentin and Folsom Prison notwithstanding.

O’Sensei’s palette changed.  The difference between his pre- and post-war aikido continues to reverberate in the aikido world as we argue which was better, or more effective, or whether he simply introduced the spiritual aspect of aikido after the Second World War in order to make it acceptable to the occupying Allied forces.

For whatever reason, his palette was different and he painted different pictures.  They weren’t worse or better.  After all, aikido is a dynamic art and the definition of “dynamic” is “characterised by constant change, activity or progress.”

I myself hope to continue to paint aikido pictures for many years to come, but I don’t expect them to remain the same.

I will leave the last word, however, to Clive James:

Feeling old can have its own style. I shuffle quite dynamically. It can get tough, though, when you see the young fizzing with the same energy that you once wasted.